If nothing else a telescope should perform well as an optical instrument before I worry too much about it’s look. This hasn’t always been such a strictly held view. I’ve bought or looked through many instruments that lured me in by looking great, only to find that the views through the eyepiece we only so-so. Those that I’d mistakenly paid for were sent back to their boxes to consider their position.

Without naming names these scopes have included an 8″ SCT that refused to hold collimation, a high focal ratio classic frac that’s focuser spurned any attempt to find its spot with any of my eyepieces and a 150mm Maksutov that should on paper have provided just a little better definition of the Jovian belts, but never did.

So I have been bitten a few times. I’ve learnt that old, antique scopes like victorian brass refractors often deliver cramped, low constrast views with tiny fields, so I now buy these only to look at or to fix-up if an opportunity comes along cheap. Newly purchased kit is returned without delay if it under-performs, no hesitation. That just leaves the tricky in-between of used scopes that still promise to deliver both pin-sharp views and perfectly proportioned lines, at bargain pre-owned prices. Here lies the domain of the red flag. The scope you wanted as a teenager but could never attain. The super-dob that needs a tune-up that only you can provide. The all-in-one mini observatory that promises to be all the scope you could ever need.

The Celestron C5 Astro model I spotted on an auction site ticked all of these boxes. Unreachable in my youth. Tick. Collected by many. Tick. Dusty and unloved and hence waiting to be discovered after decades in a loft. Tick.

I blew £140 anyway, with the bill approaching £200 once it was packed up and couriered to my door. When I peeled back the cardboard the first thing was the smell.

The carrying case had protected the scope but in doing so had adopted an odour that suggested either stale cigarette smoke or leaking damp shed.

The telescope itself was intact but showing its age, which at this point I estimated to be close to 40 years.

Looking online I came across a record of C5 serial numbers via the Cloudy Nights astro forum. A contributor to the forum had collected serials from many users and put them together in a chronological list known as the “C5 Registry”. The list suggested my scope was put together in 1981 or 1982.

The optics didn’t look too shabby but there was only one solution – take the thing apart, tidy up the flaking paint, and in the process discover its secrets.

The C5 is not the first scope I’ve dismantled without paying much attention to the which bolt attached to the which part. Fortunately is wasn’t too bad to rebuild the little beast.

If you look under the base of a classic C5 (or a C8), you will find a pair of synchronous AC motors nestling on either side of centre.

Mine didn’t come with a power cable. That led to another online search which revealed that the power plug was common to some Wurlitzer organs!

After locating a suitable cable and adapter I was pleased to find that the C5’s motors were both running fine, rotating the base of the scope without fuss. This was how they got to the moon.

And after unpacking, unbolting, inexpert cleanup and re-assembly, I was almost ready to sit back and admire the wonderful lines of this compact instrument. Almost? Well it had to function. I could only smile whilst turning the slow motion knobs and listening to the rotating gears if I knew that the lens at the front and the mirrors inside did their job. So I took some shots and cast a critical eye.

It works. And I love it. A wedge and tripod would be nice but then again the house is full of tripods, and the C5 Astro is great for grab and go trips to the garden table. Almost forty years after my C5 emerged from the Celestron factory I’ve found a scope that does justice to my the orange writing on my 1990s set of Halloween plossls. It’s a keeper. I made a video here. 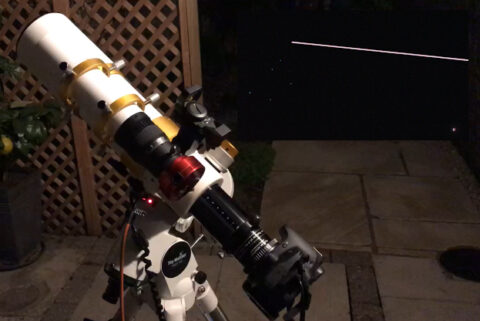 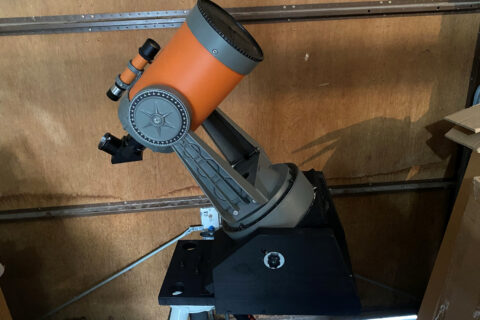 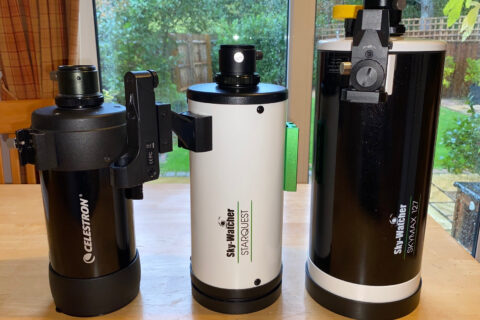